Alright, the final stretch for now.

So I collected all the aero, seats, brakes and shell. Next on the list was the power train. I had to get it narrowed down.

I decided to go with another SR20DET. Boring and repetitive but it is what it is. Looking locally for one, the importers didn’t have much to choose from.

The one that I wanted was a S13 blacktop but the engine has low compression in cylinder 1. Another local importer has some engines but I had a bad experience with them so I passed on even looking.

Meanwhile, I decided Ganadors were a must if I was going to build this car. The Ganadors on the R32 were from the old S13 so I had either 2 things I could do:

Get another pair of S13 Ganadors

Well S13 Ganadors are getting really expensive so it was cheaper to find R32 ones and get them repainted.

With another distraction down, I needed to really focus on getting an engine. I began looking at S13’s that I could part out and use the engines.

Everything that I was finding was ragged out and bad compression numbers. It was extremely depressing trying to find another good SR20DET that was healthy.

Eventually, I came across a car that seemed to be what I wanted. The guy selling it had the car for 10 years and was built prior to him owning it. He had only put Stance coilovers on it in the last few years but never got to drive it, due to kids.

It took us a month to meet up due to scheduling and after driving 2 hours to look at it, the compression wasn’t good. Or so we thought. The car ran just fine, pulled as hard as the R32 did but something was off so I passed on it.

The owner went and had the car checked out and video’ed the compression test with a new gauge, the engine was HEALTHY.

I drove back 2 hours, loaded up the car and took it home. Got a car with a decent engine!

I got the car home and drove it into the garage. Looked over it one more time and realized that I should just build off this car than ripping the engine out and putting it in the shell.

I started cleaning up the car the next day and beginning to part out the white S13 Shell I had been saving for months. 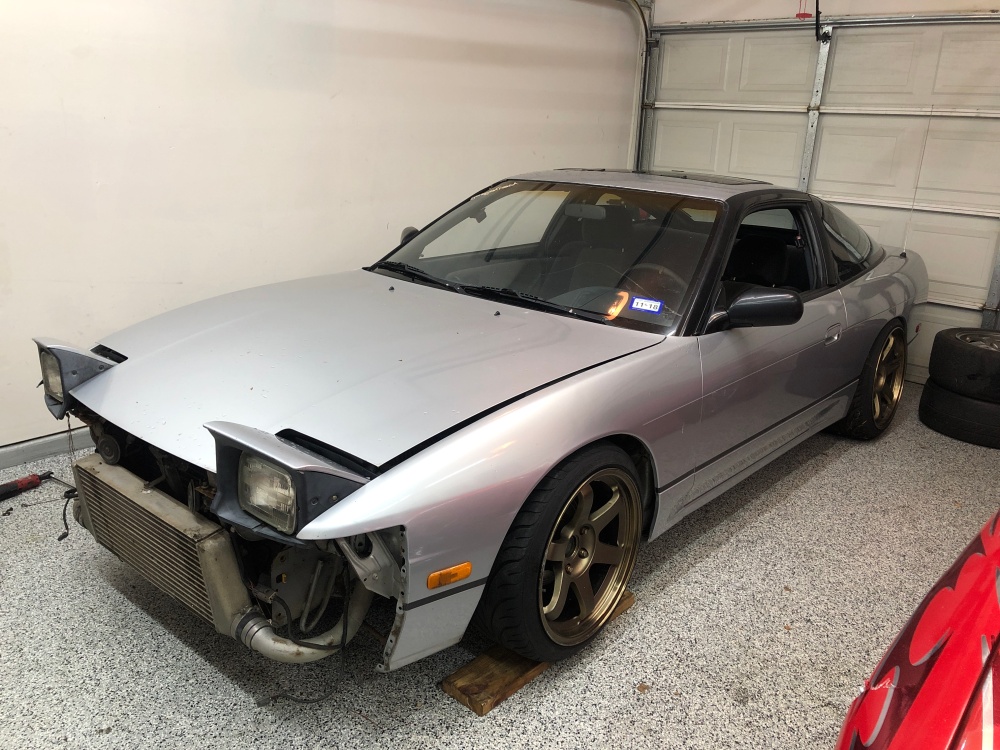 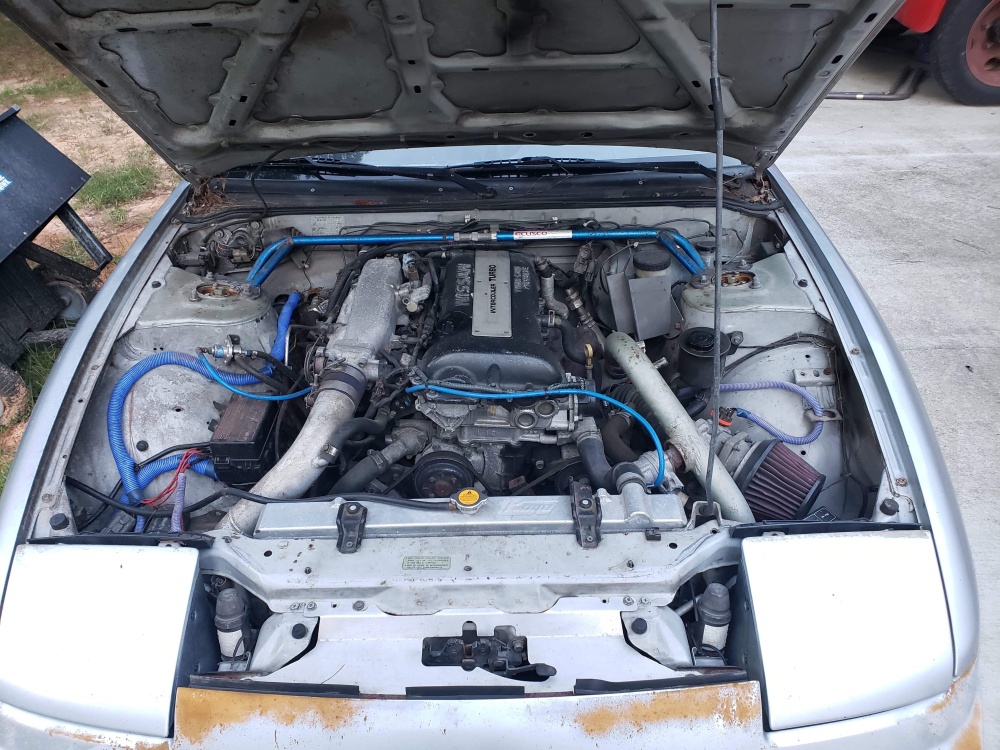 This car is so mid 2000’s built. Has a working S15 cluster, wiring loom covers, HKS fan controller and funny shift knob. And it was built pretty well. Nothing that couldn’t be undone.

I parted out the white shell. Sold everything I didn’t need. Kept the black interior. Began putting on aero and my seats. 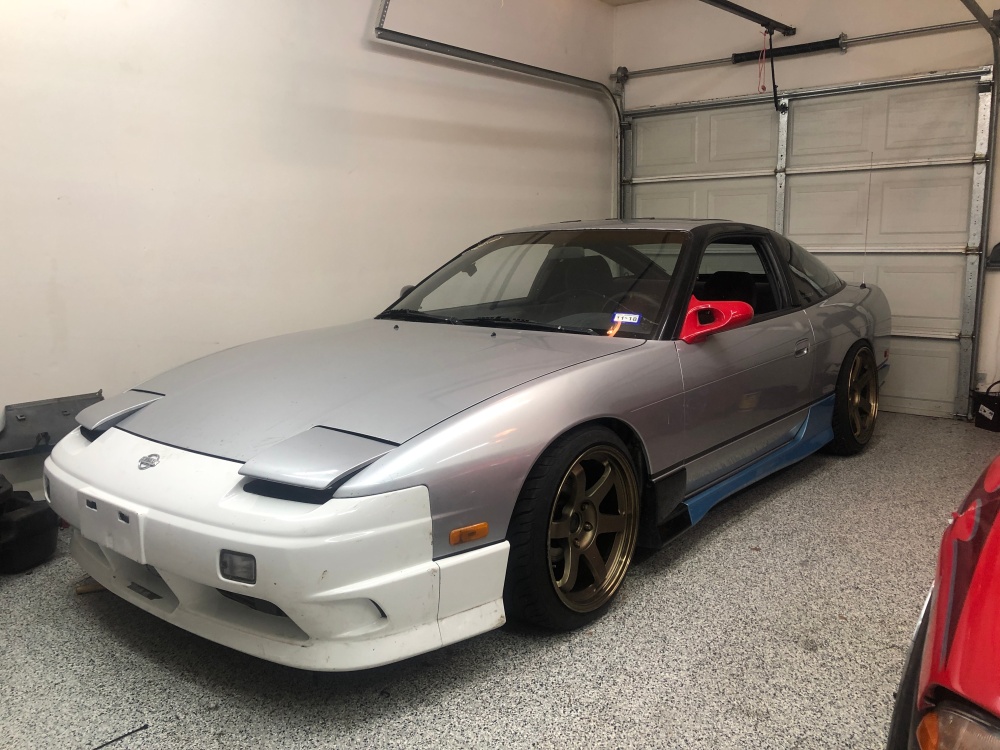 This is the point when Damon arrived. We installed the Z32 brakes, tucked the fender harness, started removing the blue interior, put in S14 FLCA’s, removing all the old harness, and cleaning up what we thought needing replacing. 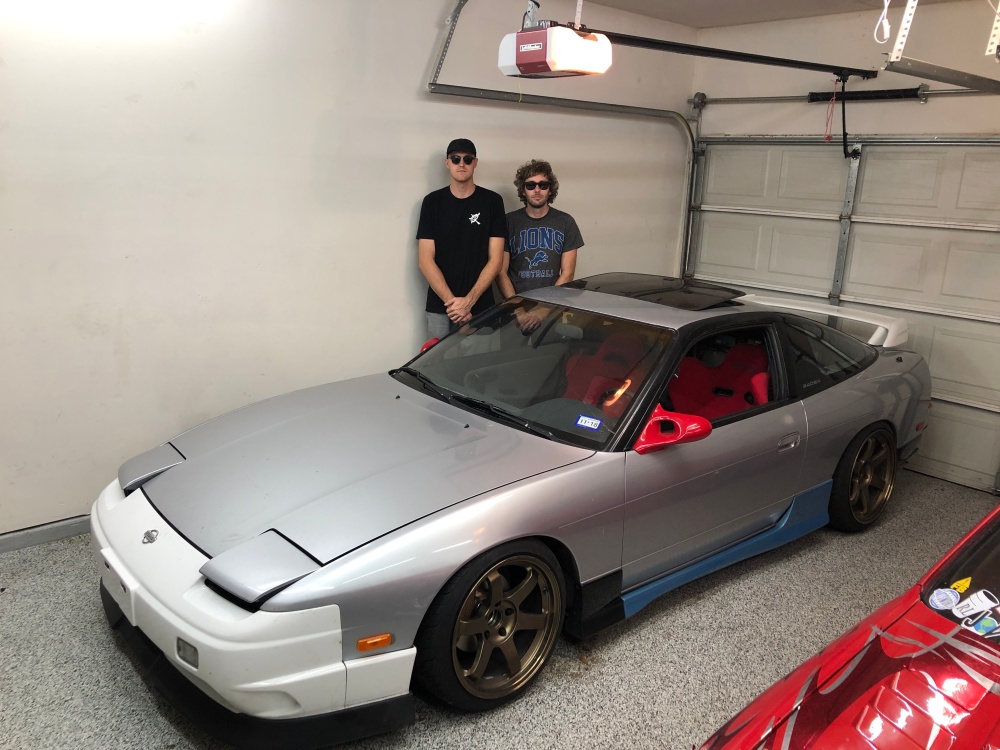 As of this week, I ordered a new engine harness from wiring specialties, new black carpet, clean dash and manual seat belt conversion.

This should be where I can stop and drive the car around until I feel it’s ok to paint the car responsibly.

I have to clean up the R32 first before painting the 180sx so that both cars are done.

It took a while but keeping this car a secret until I felt it was “done” was a cool goal. Not everything needs to be blasted on social media but it doesn’t hurt to share. It was an experiment that I wanted to try and I feel that I accomplished it.

So I’ll have a couple more updated on this car but shouldn’t be too much since the car is fairly simple.