Man what I day! Lots to talk about.

Woke up early again but this time I had stuff to do. I had to swap out a turbo to manifold gasket on the R32 practice car and change the oil. I was given the gasket the day prior so as soon as the sun was up, I headed out. Unfortunately, the R32 was at the GTR Garage Upper Lot and I was told to not take pictures there. So anyways, I got started with the gasket. Didn’t have many tools or help so things got difficult but I got it done. Had to run down to the lower lot to get a oil container to hold the old oil and stop by Yellow Hat to get new oil. While I was at the lower lot, i dug through the tires that GTR Garage had so I could use them for practice at Hadashi next week. Got the oil changed and everything buttoned back up. Then it was time for lunch. It was Miso Ramen with Goyza and Fried Rice.

After lunch, I was pretty tired from working on the Skyline so I took a nap. This was probably from close to 5 to 6:30pm. There was a car meet close to Hiroshima that Bad Quality holds call the Marina Hop meet and I was going to ride out there with a few of the local military guys.

Headed to the meet and I was riding in a local’s FD. Did a little spirited driving through Hiroshima to get to the meet. Got the the meet and it not disappoint. There were some really cool cars. Cars that I have seen on the internet and stuff. Here are some pictures. 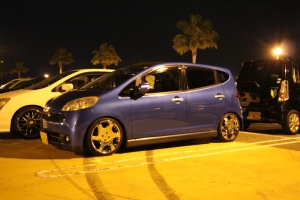 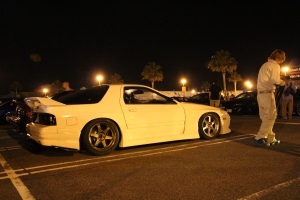 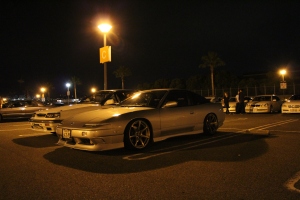 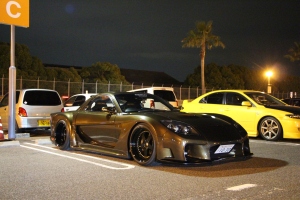 After meet, we made our way to the touge. We stopped off the expressway to use the bathroom and to get a coffee. Here is what we found.

From the rest stop, we went up the touge. Right before we got to the touge, we stopped at the Family Mart to get food. This was probably the coolest cars I’ve seen at  in Japan at this point.

I got a churro from the Family Mart and we were off to go up the touge. Got to the touge and watched the drivers. I didnt take many pictures or videos because those who are driving could have a chance to get into trouble if stuff is posted. Lets just say it was pretty exciting to see all types of cars attack the mountain roads. Evo’s to Civics, you could here the cars run up the mountain as fast as they could.

So at this point, it was 4AM and we started to make our way back to Iwakuni. We stayed pretty late at the touge because someone crashed and we were helping them out so the cops didnt get involved. Got back to the apartment at 5AM but I couldnt sleep because I had to begin to clear my memory cards of all the media so I could take more pictures and videos at D1SL in a few hours.

I headed out to Hadashi for Round 2 of the D1SL Southern Region. It was a smaller event but since I was the only one with a camera (and Im a foreigner), they let me stand on track to take pictures. I will upload all the videos I have onto Youtube as soon as I can.

After the event, I was exhausted. I think I got a head cold and was not feeling too good. I guess staying up for so long really took the toll on me. I got back to the apartment at 7ish, ate dinner, took a bath and went to sleep. Slept for 12 hours and now Im on my way to Hadashi to get some practice in before the Kids Heart event on Sunday. Ill post all the D1SL pictures next.